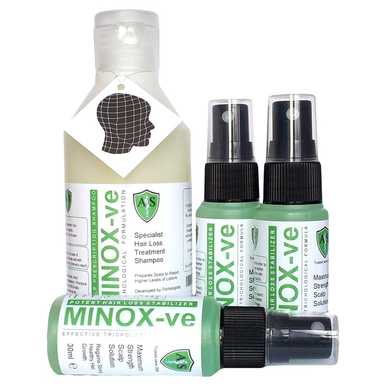 By MD: Lee Anthony
"Thank you for visiting this 'NO BS' page on hair loss
where I'll make three very clear promises to you upfront.

I'm making these promises because perhaps like you, I've done
the rounds, been caught out once or twice and parted
with my hard-earned cash on products that didn't deliver.

(There are well over 300,000 hair & scalp products in the
northern hemisphere alone. Even if money wasn't an issue, taking
the time to 'try out' each one to see if it achieved success would be).

I've been very fortunate. In 2016 a chance conversation
with my father solved my hair loss problem.

Now then, just so that there is no misunderstanding
please let me define what I mean by the word 'solved'.

When I say that my hair loss problem has been solved
I mean that hair loss is no longer a problem for me.

And just in case you're thinking 'ah well that might mean
he's had a change of mind and he's now okay with
losing his hair...'

Nope. I mean solved. I mean specifically that: -

My hair is no longer falling out at the rate it was. It's normal
I no longer have random bald patches across my scalp.
The thickness and strength of my hair has improved.

When I say solved. I mean SOLVED.

Alright then so now we're on the same page with what I
mean by 'solved'... back to my three clear promises.

​PROMISE #1:
I'm NOT going to try to sell you anything here.
You can relax. Whilst I do have a solution
to share, there is nothing for sale here.

PROMISE #2:
The headline of this article is ABSOLUTELY
100% truthful. A 60 second chat with my
father really did solve my hair loss problem.

Continue reading and I'l share what exactly what
was said. Why it was said and what I did next.

PROMISE #3:
I'll NEVER email / contact you again if you
don't want me to.

I won't send you spam email, share your email
with anyone else or try to sell you anything by post.

So now you're clear of what I mean by 'solved' and
you have my three ironclad promises I'll tell you why
you need to get your hands on this information.

​It might be a good idea to let you know a little bit
about me, then about my father then about the
60 second chat that we had that solved my hair loss.

ABOUT ME
​
Up until being around 33 years old I had a fine head of hair.
At one point shoulder length, thick and curly. No problems.

But during a messy divorce I began to notice unusually
large amounts of hair coming out when washing my hair
and on my pillow in the mornings.

Another change I noticed was my hair was becoming thinner.
In photos I saw of me, I didn't recognise my hair.
That reads silly but there's no simpler way to describe it.

If you take into account the 'usual' measures
I'm a pretty healthy guy.
I don't drink alcohol. I don't smoke.
I easily drink 2L of water a day.
I'm not vegetarian but my diet is 80% vegetarian
I eat plenty of fresh fruit and I run 3-4 times a week.

I suppose I thought at that time the change in the
condition of my hair was age related; I'd had my good years. I semi-
reluctantly tried two over the counter hair loss treatments
I also tried a couple of remedies sold on the internet.

Alas I saw no results.

Some months later I was mortified when a new girlfriend
asked me how long I'd had the patch at the back of my head.
Within another six weeks I had one large patch and three
smaller sized patches beneath my crown to the rear and left.

Now here's where things get more interesting.
My father is semi-retired.

Since the 1980's he's been involved in the research
and development of hair care products. He's a very
clever guy. His niche manufacturing company exports
highly specialised products across the world.

The quality of the products his company produce FAR
exceeds the quality of ANY product that you could
pick up from ANY superstore, pharmacy or hairdresser.
Brand names are inferior by comparison.

Basically my father's expertise of the hair and scalp
had been drip-fed to me over the years and this had directed my
'quick-fix' product choices when trying to treat my own hair loss.

So given what I knew about the general effectiveness of
what was on the market at the time, I accepted the poor results
they offered eg. I was aware minoxidil only works for one in three people.

"...BUT NOW MY HAIR LOSS HAD BECOME SEVERE
I WAS DESPERATE FOR A SOLUTION THAT WORKED"

Perhaps it was spurred on by my new relationship but
I think for the first time I felt it really mattered.

I could live with thinner hair and less of it; 'a good trim
I thought and it will look okay.'  But bald patched on top?
Christ! I wish I had left my hair long.
At least it would have covered up the bald patches.

So I'm driving to work and happen on my father's details
as I'm thumbing through my contacts to find someone else.

I take glance in the rear view mirror, quarter turn my head to the right
slightly and see the start of the frontal most patch above my left ear.

WHAT I DID NEXT.
THE RESULTS I'VE HAD SINCE.

​The package arrived next day. A spray bottle of light green
fluid with a natural menthol aroma. I began using it the following
day as instructed. I used it every night without fail.

Within a week my hair felt noticeably thicker and I
thought less was falling out whenever I shampooed.

Within three weeks there seemed to be a definite reduction
in my hair fall. Another two to three weeks the
appearance of fine hair shafts from three of my patches.

Around week 12 I could see new growth from all four patches.
...and on went the progress until at six months I can
say hair loss is no longer a problem for me.

As I stated earlier...

My hair is no longer falling out at the rate it was;
it's as normal as it's ever been.

I no longer have random bald patches across my scalp;
all four have completely cleared up.

The thickness and strength of my hair has improved;
for a guy in his late forties I'm delighted now with my hair.

REMEMBER HOW I SAID THERE IS NOTHING FOR SALE?
THERE ISN'T, BECAUSE I BOUGHT THE BRAND AND ITS RIGHTS!

That's right. I have been so impressed with how this product
​has solved my own hair loss problem that I bought the brand.

I'll never email / contact you again if you
don't want me to?

Well I will leave that up to you; here's the caveat...
if you'd like the opportunity to be entered into our

Enter your details below and I will enter you
not just this month but EVERY MONTH.
*Your details will only be removed if you win.

Sound fair? Then go ahead...
You have absolutely nothing to lose.